I grew up in a household infused with Shi'ism.I still remember the first Persian poem I heard  my Grandfather reciting during Muharram, it was Qaani's elegy: 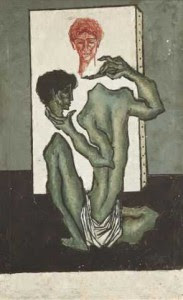 Blood.
Who?
The eyes.
How?
Day and night.
Why?
From grief.
Grief for whom?
Grief for the king of Kar

For Sufi's Imam Hussein is the symbol of a process of spiritual development of man and the long periods of suffering which are required for the growth of everything that aspires to perfection.

As Anne Marie Schimmel writes  “Husayn b. 'Ali,  is a model for the Sufi; he is the suffering lover,  enamoured by God, sacrificing himself on the Path of divine love as an  ideal lovers of God whom the pious should strive to emulate.”

The keynote of Sufism is the union, the identification of God and man.The highest good to which the Sufis can attain is the annihilation of the physical to keep the soul pure--to forget that they have a separate existence, and to lose themselves in the Divinity as a drop of water is lost in the ocean.In order to obtain this end, Imam Hussein achieved baqa by his martyrdom in the name of Allah. The use of ‘Karbala’ as a metaphor expands the horizons so much that it becomes almost impossible to limit the connotations.

In all the Sufi lands from Persian to Turkey to Subcontinent---Sufi interprets the fate of the Imam Husayn as a model of suffering love for Allah, and thus as a model of the mystical path.He is the symbol of ego annihilation for all those who want to pursue the path of Divine love.

This is echoed in the Divan of 'Attar (nr. 376) in which he calls the novice on the path to proceed and go towards the goal, addressing him:

Be either a Husayn or a Mansur.

In one of the central poems of his Divan, Sufi poet Sanai describes his Hero Husain, as the foundation for the development of man and the long periods of suffering that are required by those aspiring spiritual perfection.

In some of the earliest popular Turkish Sufi songs, composed by poets like Yunus Emre in the late 13th or early 14th century, the Prophet's grandsons have found a pivotal and special place. They are described by Yunus in a lovely poem as the 'fountain head of the martyrs', the 'tears of the saints', and the 'lambs of mother Fatima'. Both of them, as the 'kings of the eight paradises', are seen as the helpers who stand at ‘Kausar’ and distribute water to the thirsting people, a beautiful inversion of Husain suffering in the waterless desert of Karbala'.) Yunus has also covered in his poetry the popular legend of Prophet witnessing angel Gabriel bringing a red and a green garment for his grandsons and then informing him that the color of garments pointed to their future deaths through the sword and poison.

Husayn b. ‘Ali is ‘the secret of God’, the ‘light of the eyes of Mustafa’ (thus Seher Abdal, 16th cent.), and his contemporary, Hayreti, calls him, in a beautiful marthiya, ‘the sacrifice of the festival of the greater jihad’.

Has not his neck, which the Prophet used to kiss, become the place where the dagger fell?

Dawn sheds its blood out of sadness for Husayn, and the red tulips wallow in blood and carry the brandmarks of his grief on their hearts … (Ergun, Bektasi sairleri, p. 95).

In subcontinent poetry, From the broken threads of  Karbala's catastrophe, poets and writers have weaved narratives of hope and optimism, reaching out to people throughout the ages.One of the most recited and famous persian poetry in the Honour of Hz.Imam Hussain was written by the great Sufi master Hz.Khawaja Moinuddin Chishty (ra) :
Shah ast Hussain, badshah ast Hussain
Deen ast Hussain, deen panaah ast Hussain
Sar daad, na daad dast dar dast-e-yazeed
Haqu-e-binney la ilaahaa ast Hussain
–Translation–
King is Hussain ,King of Kings is Hussain
Faith is Hussian ,Protector of Faith is Hussain
He gave his Head ,but not his Hand in the hand of Yazid Verily ,truth is nothing but Hussain:

The truth, according to this thirteenth-century Sufi (Chisti), is that the very core of Islam, its essential creed of tawhid, or Divine Unity, ‘la ilaha illa lah Muhammadan rasul Allah,’ or ‘there is no god but Allah, and Muhammad is His messenger,’ is Hussain.

In the words of the great Indian Sufi of Iranian origin, Khwajah Mu'in-al-Din Chishti:

He gave his life but wouldn't give his hand in the hand of Yazid (for allegiance, bay'ah) Verily Husayn is the foundation of la ilaha illallah
Since Hussain refused to pay allegiance to Yazid, in spite of having to make innumerable sacrifices, he is projected as an embodiment of Islam’s creed that refuses to acknowledge any power other than that of God; he is the symbol of Tawheed for a Sufi. 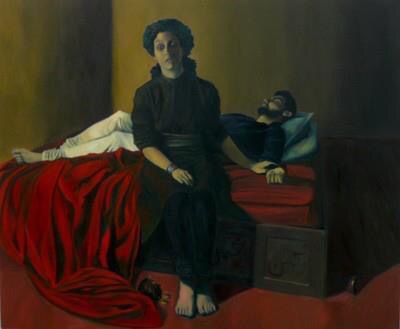 Rumi is addressing the Muslims world enamored with Greed and materialism ---laments that man has sunk to such a lowly state that he thinks only of his selfish purposes and wishes and does everything to fondle the material aspects of his life, while his religion, the spiritual side of his life, is left without nourishment, withering away, just like Husayn and the martyrs of Karbala' were killed after nobody had cared to give them water in the desert.It echoes the indifference of that age and the choice Yazidi army made when they decided to extinguish the flame of the Prophet’s family---and the materialism and greed which still reigns the Islamic world.

Another Persian poet Hayreti, calls him, in a beautiful marthiya, 'the sacrifice of the festival of the greater jihad'. And asks Has not his neck, which the Prophet used to kiss, become the place where the dagger fell?

Muhammad Muhsin, who lived in the old, glorious capital of lower Sind, Thatta, with whose name the Persian marthiya in Sind is connected. During his short life (1709-1750), he composed a great number of tarji'band and particularly salam, in which beautiful, strong imagery can be perceived:

The boat of Mustafa's family has been drowned in blood;
The black cloud of infidelity has waylaid the sun;
The candle of the Prophet was extinguished by the breeze of the Kufans.

Tamaam jism-e-nazneen, chida hua, kata hua
Yeh kon ziwiqaar hai, bala ka shahsawaar hai
Ke hai hazaar qaatilon ke samne data hua
Yeh bilyaqeen Hussain hai
Nabi ka noor-e-ain hai
(Translated from Urdu)
His dress is torn, with mud it is worn
His splendid, delicate body is cut, slashed, and torn
Who is this dignified, master horseman?
Who is standing his ground in front of an army of thousands?
Indeed it is Hussain, it is Hussain
The Light of the Prophet’s eyes, it is Hussain

But in the modern poets, no one understood Hussain’s sacrifice better than IQBAL.
It is from Husayn, says Iqbal, that we have learned the mysteries of the Qur'an, and when the glory of Syria and Baghdad and the marvels of Granada may be forgotten, yet, the strings of the instrument of the Muslims still resound with Husayn's melody, and faith remains fresh thanks to his call to prayer.IN Rumuz-i bekhudi  Iqbal praised  Husayn as the imam of the lovers, the son of the virgin, the cypresso of freedom in the Prophet's garden. While his father, Hazrat 'Ali, was, in mystical interpretation, the b of the bismi'llah, the son became identified with the 'mighty slaughtering', a beautiful mixture of the mystical and Qur'anic interpretations.
As he passionately articulates in Persian:
Ramz-e-Qur’an az Hussain amukhtim
za-atish-e-ou shola ha andukhtim
I learned the lesson of the Qur’an from Hussain
In his fire, like a flame, I burn

Husayn  embodies all the ideas which a true Sufi should possess, as Iqbal draws his picture: bravery and manliness, and, more than anything else, the dedication to the acknowledgment of God's absolute Unity; not in the sense of becoming united with Him in fana as the Sufi poets had sung, but, rather, as the herald who by his shahada, by his martyrdom, is not only a shahid, a martyr, but at the same time a witness, a shahid, for the unity of God, and thus the model for all generations of Muslims.

For Iqbal, the position of Husayn in the Muslim community is as central as the position of the surat al-ikhlas in the Holy Book.It is true, as Iqbal states, that the strings of the Muslims' instruments still resound with his name, and I am going to end this blog with the  last verse of the chapter devoted to Hussain in the Rumuz-i bekhudi:
O zephir, O messenger of those who are far away
Bring our tears to his pure dust.
Ronay wala hoon Shaheed-e-Kerbala key gham men main,
Kya durey maqsad na dengey Saqiye Kausar mujhey
I am one who weeps at the plight of the Martyr of Kerbala
Won’t the reward be given to me by the Keeper of Kauser

He gave a speech to people the day before his departure and said:

"... Death is a certainty for mankind, just like the trace of necklace on the neck of young girls. And I am enamored of my ancestors like eagerness of Jacob to Joseph"

Quran welcomes souls like him into heaven and says:

O The satisfied peaceful Soul return to your Lord pleased with His Goodwill. So enter among My (beloved) servants and  My paradise.
(Surahe Fajr: 27, 28, 29)
Kings like Yazid had arraows rained on his funeral in Medina &  Abbasid  Caliph AlMutawakil disgraced Imam Hussain's Tomb; changed course of Euphrates in hope of his grave drowns and is never  found again but Hussain Ibn Ali lived in the hearts of poets & Sufi's ----and any heart which recognises the truth  be it that of a Christian and Hindu. Malcom X used to read Imam Hussain's biography in his last days and so did Khalil Jibran and Gandhi.
Pure Hearts recognise his courage to die for his beliefs. He never compormised on his integrity. He never bowed down to a tyrant aspiring to be a byzantine king. He is a north star for every revolutionary working for a just system; every woman fighting her abuser & every Sufi refusing to let materialism dictate his life choices.
Aspire to walk in his path!
Imam Musa Kazim came in dream of  Sufi and advised that: " When there is noone and the world has abandoned you & you must fight evil and your Yazid alone;  remember the Prince of Martyres and he shall  bless you with courage in your trial.
So many of you might be fighting your personal Yazids this Muharram because Yazid is a philopshy of opportunism; of power hungry megalomaniacs  preying upon the innocents & enjoying their pain---ask for courage from Imam & you shall recieve it!
Never forget his sacrifice; his courage & his unwavering Allah Tawakul!
Labiak Ya Hussain!
Posted by Sofia at 3:41 PM