So a 32-year-old man with no leadership experience and toxic religious agenda is playing with the lives of millions of Muslims with the support of a NeoNazi President elected mainly on his hatred of Muslims and immigrants. Everything about the alliance of white supremacy and Wahabism is suspect.

Is Saudi Prince Muhammad Bin Salman white supremacy's ultimate plan to reign hell on Muslims of the world and hasten the creation of Temple?

Yes, because if any other ruler of any other country say China or Russia had imprisoned the financial muscle and political elite of his country on trumped-up corruption charges --- you would have the US propaganda machine screeching about human rights? 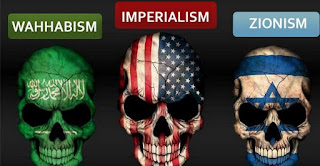 But now as the US war machine is going to sell arms worth billions of dollars to Saudi Shia genocide Warmachine to funnel into Syria, Yemen or Lybia or to kill more Muslims and decimate more Muslim societies with sectarian warfare ----- the establishment( even the Guardian) calls him a reformer; an architect of new Saudi Arabia---he will be an architect but of invasion of Iran and global warfare rather enabler of Jewish Neocon plans. He is consolidating power to so he can start sectarian wars in the MiddleEast and ---his international media handlers are defending because this grand plan was hatched 100 years ago ----they have just found a willing executioner of it now!

A civil war within Islam always been the raison d'être of creation Wahabism and yes Wahabism was created; it did not exist from 1400 years ago as its creators would like you to believe.

Wahhabism: A Freemasonic Conspiracy Against Islam

There is a black cult of death which propels Daesh or ISIS; funded by petrodollars and nurtured by sectarian fault lines ---this cult is funding ISIS; bankrolling fundamentalism and genocide of Shias.
Following the dictates of Hegelian dialectic, the Globalists have created two antagonizing forces, the "Liberal-Democratic" West, against Terrorism, or "political Islam", to force us into the acceptance of their final alternative, a New World Order.

That a British spy by the name of Hempher was responsible for the shaping of the extreme tenets of Wahhabism was mentioned in a Turkish work, Mir'at al-Haramain, by Ayyub Sabri Pasha between 1933-1938.

British policy in its colonies often involved the creation of deviant sects, in order to Divide and Conquer, as was the case with the Ahmadiyya sect of Islam in India in the nineteenth century.The details of this conspiracy are outlined in a little-known document by the name of The Memoirs of Mr. Hempher published in series (episodes) in the German paper Spiegel, and later in a prominent French paper. A Lebanese doctor translated the document to the Arabic language and from there on it was translated to English and other languages.

The document is a first-hand account by Hempher of his mission for his government, which sent him to the Middle East to discover ways to undermine the Ottoman Empire. But most important was the strategy to "insert heresies into Muslims' creedal tenets and then criticize Islam for being a religion of terror." To this purpose, Hempher located a particularly corrupt individual by the name of Mohammed Ibn Adbul Wahhab.To understand the brand of fanaticism that Wahhabism inculcated, it is first necessary to recognize that Islam called upon all Muslims, regardless of their race or nationality, to see themselves as brothers in faith.

The killing of another Muslim was strictly forbidden.

However, as part of their strategy of Divide and Conquer, the British hoped to pit the Arab Muslims against their Turkish brothers. The only way to do so was to find a loophole in Islamic law whereby the Arabs could declare the Turks as apostates.Abdul Wahhab was the instrument by which the British were able to insinuate this vile idea into the Muslims of the Arabian Peninsula.

Basically, Wahhab contrived the idea that, simply by the trivial act of offering prayers to saints, their Turkish brethren had forfeited their faith, and therefore, that it was permitted to kill all who refused to adhere to his reforms and to enslave their women and children( they use the same logic to bomb Sufi shrines today). 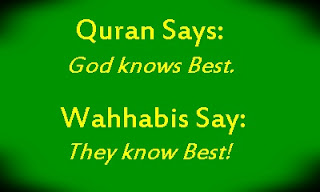 But that included the entire Muslim world, except for his small misguided band of followers.

But the Wahabbi movement was insignificant without the allegiance of the Saudi family, who, despite claims otherwise, were descended from Jewish merchants from Iraq. Orthodox jurists of the time branded the Wahhabis as heretics and condemned their fanaticism and intolerance.

Nevertheless, the Wahhabis then demonstrated their contempt for their pretended faith by indiscriminately slaughtering Muslims and non-Muslims alike. The Wahhabis then set about destroying all the holy tombs and burial grounds. They stole the Prophet's treasure, which included holy books, works of art and innumerable priceless gifts sent to the city during the previous thousand years. The leather and gilt bindings of the Islamic holy books they had destroyed were used to make sandals for the Wahhabi criminals.

Wahabism aiding the Zionist Project
The Ottoman Sultan brought an end to the first Wahhabi rebellion in 1818, but the sect revived under the leadership of the Saudi Faysal I. The movement was then somewhat restored until once again destroyed at the end of the nineteenth century.

After WWI, the former regions of the Ottoman Empire were divided into varying puppets regimes. For aiding to undermine the Ottoman authority in the region, Ibn Saud was duly rewarded with the creation of the Kingdom of Saudi Arabia in 1932. One year later, in 1933, the Saudis granted oil concessions to California Arabian Standard Oil Company (Casoc), an affiliate of Standard Oil of California (Socal, today's Chevron).

Since that time, Saudi Arabia has been the most important ally of the West in the Middle East, not only providing ready access to its plentiful oil reserves but also in tempering Arab aggression against Israel. Even today, Saudi Arabia has no taken a single Syrian or Palestinian refugee or aided the Palestinian people in their cause in any way.

Due to the evident hypocrisy of the regime, it has been necessary to suppress the ensuing dissent with brutality. Another important aspect has been preventing scholars from speaking of "politics", that is, to criticize the regime. It supports grotesque misogynistic practices as Islam t appease the mullahs while financing genocides of Muslims elsewhere.

In The Two Faces of Islam, Stephen Schwartz writes, "Their tastes led them to taverns, casinos, brothels ... They bought fleets of automobiles, private jets, and yachts the size of warships. They invested in the valuable Western art they did not understand or like and which often offended the sensitivities of Wahhabi clerics. They spent as they wished, becoming patrons of international sexual enslavement and the exploitation of children."

The result has been that, in order to nonetheless appear to be espousing Islam, the Saudi regime and its puppet scholars have evolved a version of Islam that emphasizes ceremonial details of the religion, at the expense of helping to understand broader political realities.Their manner has encouraged a literal interpretation of Islamic law, permitting the likes of bin Laden to exploit the Koran to justify the killing of innocents.

Ultimately, the profusion of  petro-dollars in the coffers of the Saudi family has made it possible for them to propagandize their bastardized version of Islam to other parts of the world, most notably to America, where they purportedly subsidize up to 80 percent of the mosques in the country, a version of Islam that substitutes political awareness for dogmatic insistence on ritualistic fanaticism.

Spreading Hate around the World!

The Saudi-based Muslim World League opened offices in every region inhabited by Muslims, and the Saudi ministry of religion printed and distributed Wahhabi translations of the Quran, Wahhabi doctrinal texts and the writings of modern thinkers whom the Saudis found congenial, such as Sayyids Abul-A’la Maududi and Qutb, to Muslim communities throughout the Middle East, Africa, Indonesia, the United States and Europe and worst on newly liberated central asian republics. Saudi money funded creation of madrassas in Dagestan and Uzbekistan and indoctrinated younf minds with severed links to their muslim heritage.

In all these places, they funded the building of Saudi-style mosques with Wahhabi preachers and established madrasas that provided free education for the poor, with, of course, a Wahhabi curriculum.

Wahhabism made inroads into Pakistan in the early 80s, when I was a child. I remember when it became mandatory for female newscasters to cover their heads. Mullahs began appearing on television insisting women should confine themselves to their homes.
Dance was banned. Cinemas closed down. Someone scrawled a sign on a wall near my house declaring Shias (a minority Muslim sect) to be kafirs (unbelievers). Now the signs go further: they incite believers to kill Shias. And indeed, over the past 20 years, thousands have been killed.
Abaya became commonplace.

The Saudis demanded religious conformity in return for their munificence, so Wahhabi rejection of all other forms of Islam as well as other faiths would reach as deeply into Bradford, England, and Buffalo, New York, as into Pakistan, Jordan or Syria: everywhere gravely undermining Islam’s traditional pluralism.

Throughout the Islamic world, from Egypt, Iran, Algeria and Chechnya, to south Asia, the anti-Sufi movement is growing in strength. Sufism is under ideological and physical threat from more puritanical breeds of faith. Sufi’s are routinely condemned and branded as heretic

It's ironic that Prophet Muhammad and Imam Ali seemed to warn against the rise of extremism in Kitab Al Fitan – a compilation of hadiths (Islamic tradition) relating to the end of times, put together by prominent scholar Nuyam bin Hammad in 229 AH.

In it Imam Ali recalled the Prophet saying:

“If you see the black flags, then hold your ground and do not move your hands or your feet. A people will come forth who are weak and have no capability, their hearts are like blocks of iron. They are the people of the State (literally the people of Al Dawla), they do not keep a promise or a treaty.

"They call to the truth but they are not its people. Their names are (nicknames like Abu Mohammed) and their last names (are the names of town and cities, like Al Halabi [and now al-Baghdadi]) and their hair is loose like women’s hair. (Leave them) until they fight among themselves, then Allah will bring the truth from whoever He wills.”

That is the spirit of hope in the face of trials that Islam talks about. As a Muslim, I believe that trials come from God. Wahhabism is one such trial but, in the end, I know we shall triumph over it.

We should dismantle Wahabi agenda religiously by truly understanding the real Islam but also politically by combating their divisive philosophy which would destroy the plurality of Muslim world and plunge it into eternal civil war!

This is the true Jihad of modern times.
Posted by Sofia at 2:45 PM