Laden with my load of misdeeds, I move about in the garb of black garments.
And the people see me and call me a dervish.


These lines are by FARID, one of the most followed mystic in Punjab . where thousands go to his tomb every year.He was a contemporary of Kabir, Nanak and others.He was a 12th-century Sufipreacher and saint of the Chishti Order .

Baba Farid’s poetry was later to influence the Sikh religion and especially their Holy Book "Sri Guru Granth Sahib" by the founder Guru Nanak. Such was the universality of Baba Farid, the Sufi poet laureate from Punjab.Revered by Muslimsand Hindus, he is also considered one of the fifteen Sikh Bhagats within Sikhismand his selected works form part of theGuru Granth Sahib, the Sikh sacred scripture 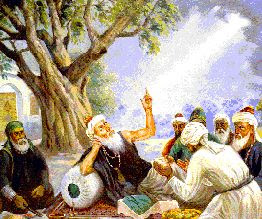 Some call him Ram, some Khuda
Some say Gosain, some Allah.

Farid has not written a book, but his songs have been written down by his people. His songs are tremendously beautiful, but you have to listen to them sung by a PunjabiHe is generally recognized as the first major poet of the Punjabi language and is considered one of the pivotal saints of the Punjab region.


Fareed, this world is beautiful, but there is a thorny garden within it.
Fareed, do not turn around and strike those who strike you with their fists.
Fareed, when there is greed, what love can there be? When there is greed, love is false.
I love him.In my childhood in the Punjab, I used to ask people, "Can you sing Farid for me?" - and once in a while I found a singer who was ready, who knew how to sing Farida. And all those beautiful singers... all those beautiful moments.... Punjabi has a quality of its own. Every language has a quality of its own. But Punjabi is certainly a sword, you cannot sharpen anything more.He is very modern and echoes every emotion, alienation, Doubt.For instance read this couplet;

Says Farid,I thought I was alone who suffered.I went on top of the house,And found every house on fire.

I went on top of the house, / And found every house on fire." The "top of the house" is the crown, the place of light, the point of awareness where divine union is recognized. From that pure, elevated awareness, one has a truer perception of reality. And, as he looks about himself in this awakened state, Farid sees clearly that everyone -- and everything! -- is already engulfed by that same "fire," everything is already consumed in divine union. The only difference between him and "every house" around him is that he has finally surrendered to the process and his awareness has been swept up to the top of the house where the "fire" is recognized as bliss and not suffering, fullness and not loss. There, standing atop the burning house, we finally realize our true nature: We are the fire and not the house at all. And the entire universe is already lit up!

In his songs he calls himself Farida. He always addresses himself, never anybody else. He always starts, "Farida, are you listening? Farida, be awake! Farida, do this, do that!" In punjabi, when you use the name Farid it is respectable. When you use the name Farida it is not respectable; one only calls the servants in that way. Farid calls himself Farida of course because he is the master; the body is the servant.

Laden with my load of misdeeds,
I move about in the garb of black garments.
And the people see me and call me a dervish
My promise to my love, a long way to go and a muddy lane ahead
If I move I spoil my cloak; if I stay I break my word
Sufi poets ike bba farid were the nigtamre of ritualistic Mullahs and orthodoxy obsessed coreligionists,They believed the heart was more important that outer trappings of religion so here he goes;


Says Farid,
Why do you roam the jungles with thorns pricking your feet?
Your Lord dwells in your heart.
And you wander about in search of Him.


The great king King Akbar used to come to Farid to listen to his songs. Akbar once received a gift, a very precious gift, a pair of golden scissors studded with diamonds. Gudia would have loved them - any woman would. Akbar also loved them, so much so that he thought they would be a good present for Farid. He came and gave the precious scissors to Farid. Farid looked at them, turning them this way and that, then returned the gift to Akbar saying, "This is of no use to me. If you want to give something to me as a gift, bring a needle."
Akbar was puzzled. He said, "Why a needle?"
Farid said, "Because the function of scissors is to cut things into pieces, and the function of a needle is to join pieces together. My function is not that of the scissors, it is that of the needle. I join things together, I synthesize."He says in his poetry;

Had I known the sesame seeds were so small in quantity
I should have been liberal in filling my fist.
Had I known my Lord was not yet an adult,
I would have prided less in myself.

In yet another verse, he says again:
Had I known the end would slip,
Tighter would I have made the knot.
Nobody matters to me as much as You,
Though I have traversed a whole world.

A student asked Baba Farid if singing was lawful and proper. He replied that, according to Islam, it was certainly unlawful, but its propriety was still a matter of discussion. Nizam-ud-Dauliya told Nasir-ud-din, a disciple of his, that one day when he went to visit Baba Farid he stood at his door, and saw him dancing as he sang the following :
I wish ever to live in Thy love, O God. If I become the dust under Thy feet, I shall live I thy slave desire none but Thee in both worlds; For Thee I will live and for Thee I will die.
The following couplet was a favorite of Baba Farid’s:
Not every heart is capable of finding the secret of God’s love. There are not pearls in every sea; there is not gold in every mine

This world indeed appears to Sheikh Farid to be an obstacle in the way of man's union with God. He says:
The lanes are muddy and far is the house
of the One I love so much.
If I walk to Him I wet my rug, and
remaining behind, I fail in my love!
Life in this world is a period of separation from God, which is full of sorrow, and pain:
Sorrow is the bedstead,
Pain the fiber with which it is woven,
And separation is the quilt
See this is the life we lead, O Lord.
Absorption in the affairs of the world, in forgetfulness of God, is regarded by Sheikh Farid as desertion by a woman of her husband and going over to an alien house.
Give it not me, Oh Lord, that I should
seek alien shelter.
If that is what You have willed,
Rather take the life out of this body.
Man's duty in this life is to win the love of God as it is the woman's to win the love of her husband, and as such, youth or age should not matter;

Those who have not wooed Him when their hair was dark,
May do so when their hair is grey.
For if you love the Lord
The newness of youth will be yours again.
The metaphors of wooing the husband and being accepted by him or failing in being accepted have been used in many other verses also:
I did not sleep with my love tonight
And every bit of my body aches.
Go ask the deserted ones,
How they pass their nights.
I am not afraid of the passing of my youth,
If the love of my Lord does not pass with it.
So many youths have withered away without love.
The fear of death is perhaps a more forceful emotion in Sheikh Farid's poetry and he has expressed it in touching figures of speech. As mentioned before, the main image is that of death as the bridegroom and the human soul as the bride, and subordinate figures, the reduction of the body to dust, the greying of the hair, the trembling of the limbs and drying away of the bones have been used to reinforce the argument. The motif of rich and poor being brought to the same end has also been used quite often, too.